Five generations of the Hill family have run a butcher’s shop in Butts Road since 1888. 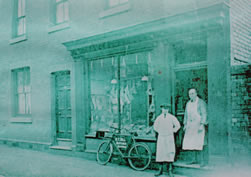 The picture on the left was taken in the early Nineteen Twenties and shows William Allen Hill and the “butcher’s boy” who was responsible for making deliveries on the push bike which can be seen in the picture.

Notice the shop still has the original Victorian window which was replaced in 1985 after it was smashed.

This photograph shows three generations of butchers. From left to right Richard Hill, the current owner, his son Ashley Hill and his father Maurice William Hill who was known to all as Bill.

Bill was born in 1926 and is the only family member who had a break from working in the butcher’s shop. In 1942 he lied about his age and joined the Royal Marines where he served on HMS Howe as ship’s butcher. On his return, Bill continued to work for the family business until he was 83.

Currently the duties at the shop are shared between Richard, Ashley and Richard’s nephew Steve Gamble.